Ms Pidge was a feral or wild pigeon who lives in Chicago.

This poor baby was hit by a subway train and lost her wing and part of her beak.

Fortunately, a kind record shop owner (Pinwheel Records, Chicago, Illinois) right next to the subway, saw what happened and also saw the smart little pidge walk right over to the dental office which was also nearby. It was as if she was asking for help!!  The record shop took her in and called a lovely lady by the name of Chava Sonnier who is a bird rescuer and rehabber.  Most of the pigeons  that they rehab, they find homes for, but at that time there were no potential adoptive homes for Ms Pidge so she became a member of Chava’s family.

Chava battled to find an avian diaper that would be comfortable for Ms Pidge due to the fact that she just had one wing.

“It was a real challenge for us to find a strap design that didn’t either slide off her wingless shoulder or put uncomfortable pressure on her” said Chava. 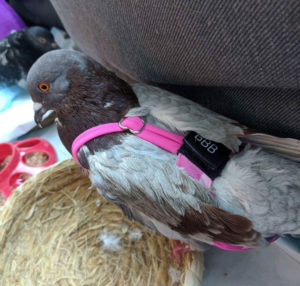 Ms Pidge didn’t necessarily appreciate Chava following along behind her cleaning up the poop as she has decided that the whole house was hers and she had places to go and things to do !!!!

Then Chava came across BEV’S BIRD BOUTIQUE and decided to try out our FLYPER STYLE for Ms Pidge.  Here is what Chava had to say:

“Oh my goodness, this is the best design ever – so easy to put on and so comfortable for Ms Pidge, it stays on her shoulder so well – the side where she is missing her wing!!!”

The back slider ensures that the strap does not slip off  her shoulder missing the wing and the straps are super super soft lycra which do not cut into her shoulders nor ruffle or chafe the feathers.  The adjustments of the straps and back closure adjust to fit her needs so well.  Both Chava and MsPidge are thrilled with the product.  Besides being a fully functional bird diaper, THE FLYPER is pretty and girly for this cute pidge too. 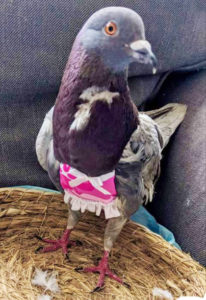 We have been made aware that pigeons are super clever and do select what they want to wear!!!!!

Yes you heard  us !!!!    Look what Chava reported the next day after Ms Pidge got her FLYPER from BBB.

“How adorable is this?  The pigeons were just resting in their nests this morning and I hadn’t dressed them yet. Ms Pidge reached up to where I always have their pigeon pants arranged neatly in a row and she selected her pink dress out of all of them and pulled it down into her nest with her and then looked at me like she wanted to get dressed!!!!  SHE HAS NEVER DONE THAT BEFORE!!!!  As soon as I put her dress on, she went strutting proudly off down the hallway on her rounds of the house!!!” 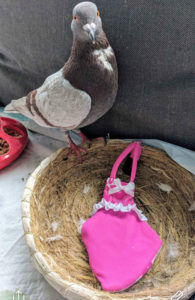 Another quote from a facebook friend reading this story goes like this “Your stuff is positively gorgeous on its own merits, but WOW – THIS is where it’s at!!! STANDING OVATION FROM ME!”